No products in shopping cart

Please add the products you wish to purchase to the shopping cart. 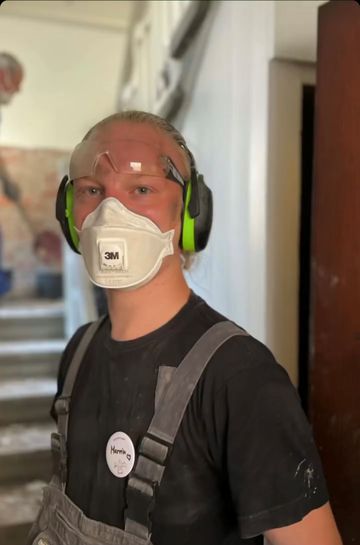 Input for flood victims in the Ahr Valley

The pictures from the Ahr Valley destroyed by the floods are probably still in the minds of most of us. We were shocked and full of sympathy for those affected.

Our employee, Marvin Schiller, who is responsible for the electrical system in our machines, immediately decided to personally help those affected by supporting the cleanup efforts on site. To do this, he took a week's vacation in August and September.

Marvin has joined the rooftop tent nomads. They organize and coordinate the efforts of volunteers, who have been continuously helping with the cleanup since the end of July. Helpers of all ages from all over Germany, about fifty during the week and twice as many on weekends, sacrifice their free time and vacation to support the flood victims.

Most of the helpers camp together on a meadow above the Ahr valley and drive from there to the changing work sites. So far, the work has mainly consisted in knocking off soaked plaster and screed so that the houses can dry and mold does not form.

Even though the two weeks of vacation were not for physical recovery - rather the opposite - Marvin is already planning his next assignment in the Eifel. There is still work to be done.

Marvin's colleague, Ulrich Conzelmann, is also helping in the flooded areas. From Monday to Friday, he builds drives for our vibratory bowl feeders and on weekends he is involved with Wohnwagen mit Herz. Here he collects donations and organizes used caravans and mobile homes as an emergency shelter for people whose houses have become uninhabitable. In some cases, he also drives them himself to the people in need in the Eifel.